Thoughts on the MESA Conference

i survived the one-two punch of MESA in Canada and Thanksgiving this week. A few highlights of the trip:
That's about it for now... my mind is a bit fried from constant travel and to-dos for the past week and a half. Hope everyone enjoyed their holiday!
Posted by hannah at 6:52 PM 2 comments:

i am in Montreal for the Middle East Studies Association annual meeting - one of my colleagues convinced our training officers that this would be a good use of our time. i am having a great time - seen lots of people i know, attended some very interesting panels that have raised some new issues for me, and (of course) have racked up on academic books at steep discounts. Canada is wonderful, but i will save my love song for Ottowa until i get back.
Posted by hannah at 2:00 PM 6 comments:

Call me crazy, but it really bothers me when a number of the people assigned to watch a particularly troublesome country or region can't pronounce the name of the country, its major political figures, or important geographical fixtures properly. Something about this just doesn't inspire confidence.

Also, here's a collection of articles about things happening in my soon-to-be-adopted-but-only-for-a-year homeland across the pond. Religion in Saudi Arabia, Saudi due process, and Mr. Abdullah goes to the Vatican (without Jimmy Stewart).
Posted by hannah at 10:35 PM 2 comments:

So for the long weekend my friend Mark flew in to see Bruce Springsteen last night in DC. We spent a good portion of Saturday wandering around DC, and we stopped by the Vietnam War Memorial to see the setup for the ceremony the next day honoring the 25th anniversary of the Wall. i've been there several times before, but never around a major commemorative holiday. i'm sure you've seen the photos of what the Wall's like when it's packed with veterans. The entire city, in fact, was swarming with vets, especially my neighborhood, right by the Iwo Jima memorial and Arlington Cemetery. They were easy to pick out, because they all had on jackets with loads of patches, buttons, slogans, and insignia. i'm not used to seeing Vietnam vets like that - most of the ones i've dealt with weren't particularly ostentatious about their service or were schizophrenic. i've met plenty of WWII vets who are always in their neatly creased hats with the appropriate pins, but Vietnam? Not so much.

Anyway, the Wall was crowded with people and memorials. One of the more surreal things we saw was a pair of American vets talking to a pair of Vietnamese vets, comparing notes on the M16. There was also a podium where people were reading out a list of the people killed in Vietnam over a loudspeaker. i've only seen that on Yom HaShoah at Wash U or in New York on 11 September. The names were mostly just a blur, but as one reader worked through her list, she prefaced one of the names with "my brother..." with no noticeable change in her tone. It was jarring.

Last night, we fought the crowds and ridiculously high scalper prices to get pretty good GA spots at the Springsteen show - the equivalent of about thirty rows back, dead center. Now, it's not a Springsteen show without some politickin', and he held true this time. Given the main themes of his latest album, it's not surprising that much of what he mentioned was topical: habeas corpus, renditions, the Iraq war. He also brought in a number of veterans from Walter Reed hospital for the show, since he played in DC on the actual Veterans' Day (Sunday, the eleventh) and the observed holiday (Monday).

The most striking song of the night (other than "Thunder Road" - yay!) was his closing song, "American Land." i've linked the lyrics here, and i'll note that it's the only song on his previous album that he actually wrote; the rest were mostly covers of Pete Seeger songs. i have this comprehension problem where i can't really understand words i hear unless i can see someone speaking them, which means that i frequently don't get song lyrics. For "American Land," however, they scrolled the lyrics on the JumboTron (or whatever the hell it's called), and i finally realized the very pointed references to immigration. Let's hope some of the yuppies there were listening.

i was trying to weave these stories together into some big contrasting view of of the holiday, but i think i'm a bit too tired to pull that off. Instead, i'll just end with one of the best sights of last night: as Mark and i were walking towards a Metro station, the band's motorcade passed us with a full escort of DC cops, and i got to see the Boss hang out the passenger side waving at us, with his fro flying everywhere. Good times!
Posted by hannah at 6:14 AM 2 comments:

A few quick vignettes before i head out on the town with a friend (museums! monuments! bars!). First of all, i'm going to be on al-Arabiyya news network tonight, because at a local mosque i and my friend going to Jeddah next summer were interviewed about King Abdullah's visit to the Vatican. Pretty sweet all around... my first appearance on international television!

Also, earlier this week we got a presentation from the Defense Intelligence Agency about military capacities in the Middle East. Obviously, they didn't give us any unclassified information, and so they had to rely on publicly available figures, which led to interesting phrases like "According to Wikipedia, the al-Qods force has between 3,000 and 50,000 members..." Ahh, if Wikipedia says it's true, it must be, right?

Finally, one of our presenters this week was a professor who immigrated from Lebanon several years ago and still has a slight accent. He was telling us (among many other tangential stories and a supposed presentation on Syria and Lebanon) about how he's always randomly selected for the extra searches at airports. However, he decided to have fun with it rather than be angry. He says that now, when he goes through a metal detector without a single beep, he jumps up and down in exhilaration and glee just to see the uncomfortable looks on the guards' faces. i would love to see this, but i think i'd prefer not to travel with him - i get enough crap at airports as it is!
Posted by hannah at 6:10 PM 1 comment:

So in many of our scenarios we discuss, fictional countries are usually used to avoid offending any particular country, person, or constituency. The two countries State favors are Ruritania and Anthuria, which pretty much hate each other but are too broke to go to war with each other.

Strangely enough, these don't roll off the tongue very well (especially for me, who has difficulty with back-to-back rs in words... can't say rural to save my life), so a variety of stand-ins have emerged that speakers prefer to use. No one seems to like my usual term Ethniklashistan, with Ickistan, Carjackistan, and Outbackistan being the preferred locations with less-than-stellar governments. There seems to be some sort of a common thread to these names, but i can't quite put my finger on it...
Posted by hannah at 5:09 AM 5 comments:

"i do solemnly swear
That i will support and defend the Constitution of the United States against all enemies foreign and domestic,
That i will bear true faith and allegiance to the same,
That i take this obligation freely without any mental reservation or purpose of evasion,
And that i will well and faithfully discharge the duties of the Office on which i am about to enter."


So, State has some of the best views of DC. Maybe someday i'll be cool enough to have an office on the top floors! 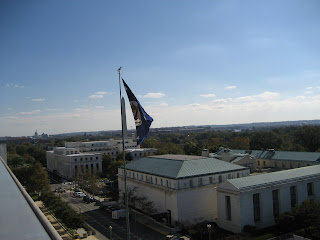 Until then, this is as close as i can get... a swearing in ceremony that lasted 30 minutes and a quick tour of the parapets. 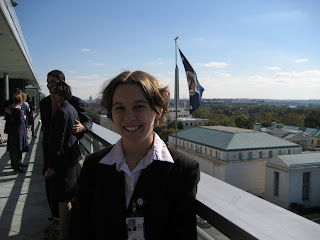 Some people meet presidents, i meet Undersecretaries of State. 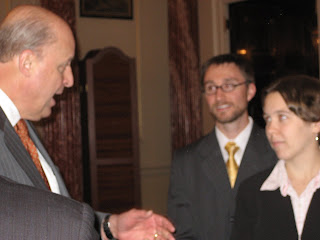 This is our class mentor, Thomas Krajeski, about whom i wrote earlier. Nice guy, speaks Arabic, all qualities that speak to his general wonderfulness. 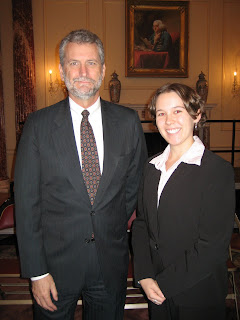 Frank and i had a little too much fun in the Benjamin Franklin Room at Main State. The reception rooms on the eighth floor are quite ornate, and they are stuffed with antiques, famous paintings, and other pieces of history that are worth far more than i am. We gravitated towards a massive portrait of an Ottoman official, with this description on the frame. "His Highness the Mushir Mohammed Essadek, Bey of Tunis. Portrait presented as a souvenir of his Friendship in November 1865, by his envoy: Gen. Otman Hashem, bearer of letters of condolence for the assassination of President Lincoln and of congratulations for the termination of the Civil War." 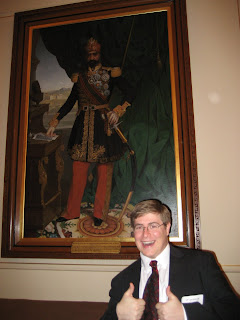 Here's a link to a News Hour transcript about the directed assignments to Iraq (text/audio).

Ambassador Krajeski is my class' mentor. He's a great guy, and i've really enjoyed getting to know him over the past few weeks. He actually came back early from his trip to Iraq last week to come to our Flag Day. Today, he spoke to us during our wrap up day at A-100, and he was a wreck. Don't believe the media accounts of Ambassador Thomas and, to a lesser extent, Ambassador Krajeski as heartless apparatchiks. This is a difficult decision for these officers - who are still in the regular Foreign Service - to make about their colleagues and themselves. We'll see how it shakes out. This is an interesting time to have joined up.
Posted by hannah at 3:07 AM No comments: