456 FS-y blogs, in various states of update and State membership.
Posted by hannah at 8:46 PM 4 comments:

I Am Terrified of Bidding

I'm still months away from the opening of bidding season, but I.  Am.  Terrified.

TERRIFIED.
I've looked through the Middle East bureau's projected vacancies for the next five years and convinced myself that I qualify for none of them, unless I want to do visa work in Dhahran (again) or manage the motor pool in Sanaa.  Not gonna lie, y'all, neither of those positions or countries are any place to which I ever want to return.  The awesome jobs I dreamed about in Beirut, Damascus, and Dubai?  They don't appear to be open until sometime in 2014.
Let's leave aside even the positions: for my third tour, I have to lobby for assignments.  It was so much easier when I gave some faceless bureaucrats a list of my top twenty choices and they picked for me.  How in the hell am I going to convince a bunch of faceless bureaucrats to love me enough not to send me to Ethniklashistan?  And even if I do get to Ethniklashistan, I will have to get there either 5 months before my tour in Istanbul ends or in three years - there doesn't appear to be anything available in between those arrival times.
I'm not the only one panicking.  This week I've walked up to four colleagues' desks and caught them all looking at FS Bid (the bidding "tool" through which we allegedly are able to find gainful employment) or printouts of available positions.  I've gotten emails from a billion people who evidently think they have enough wasta to get a post in Istanbul...  meanwhile, I'm counting my chits and hoping enough people tolerate me that I can get to Khartoum and not Juba, or Monterrey instead of Juarez.
Oh dear god.  I am so scared - and the bid list doesn't even officially come out for another two months.
Posted by hannah at 6:33 PM 8 comments:

Oh Dear God, I Am So Sorry

I have a few things about which I'm quirkily passionate.  Offering advice and information to people considering joining the Foreign Service is one of them.  I correspond with a bunch of current and former students at my university to talk about working at State, and I'm happy to see that a number of them are interning with State now or taking the Foreign Service Officer Test, the computerized exam that replaced the written test I took in 2006.  I also oversee offering the FSOT here in Istanbul - February was the first time it's been offered here since the new test was rolled out, and this month we have 14 people taking the exam here in three separate testing windows.  However, I'm sitting at home biting my nails today, because Eric (the aforementioned MOH) is taking the exam today.  It doesn't really look good for me to proctor the exam that my official, 3 FAM sanctioned partner is taking, y'know?

Evidently there's been a complete technological freakout on the part of the online testing system.  My friends who are proctoring (benevolent, generous souls that they are) have been sending me panicky texts and emails for two hours about the problems that Istanbul and evidently a few other posts have experienced today.  Apparently they just got things going, but I feel so bad for Eric and the other people testing today!  What a nightmare of a start to a rather weighty exam.

Eric mentioned that he wanted to go out for a beer with the test-takers afterwards, because he'd done that with his fellow examinees in Berlin last summer and thought it was a good experience.  I kind of want to buy them all a round or two of drinks after this.

Update, 5 June: I did take them out for a round of beer after the exam, and I ended up bringing a kitten home from the bar in my purse.  One way or the other, we won't forget this FSOT experience!
Posted by hannah at 1:26 PM 3 comments:

How to Be Romantic at State

Hey guys, how's it been?  It's been like a month, yeah?  I could offer lame reasons for why I haven't written, but who cares, right?  Excuses are like noses...  we all have them, and they all smell.  (Do you see how cleverly I made that G-rated?)

So how about some good news, eh?  Throughout the course of recent months, it's become more and more apparent that Eric and I get along well.  So well, in fact, that his roommate Serdar didn't see him for a few weeks at a time.  And this summer, Eric is interning at the Consulate, which is A) far closer to where I live than where he lives and B) easy to reach if he commutes with me every day.  In the interest of full disclosure, Eric applied for this internship before I ever met him, and he was selected as an intern before anyone in that section knew we were dating.  Also, he's not in my section.  Enough caveats?  Probably not, because with the advent of Eric sort of staying here permanently (toothbrush, suits, and all the books for his thesis are in this apartment), I started to feel a little panicky.  Like any good bureaucrat, I realized that I hadn't filed enough paperwork to make his almost-living-with-me status legit.

I'd like to say that I did something really romantic here, but I just emailed Eric from work and asked, "Wanna be my MOH?"  Now, for people in State, that's your cue to say, "Awwwww!"  For the rest of you sane people out there, let me offer you the definition of an MOH as laid out in the Foreign Affairs Manual (exact citation 3 FAM 7121):

Member of household (MOH):  An individual who accompanies a sponsoring employee, i.e., a direct-hire Foreign Service, Civil Service, or uniformed service member who is permanently assigned to or stationed abroad at a U.S. mission, or at an office of the American Institute in Taiwan, and who is under chief of mission authority.  An MOH is:


(1) Not an EFM; and
(2) Not on the travel orders or approved Form OF-126, Foreign Service Residence and Dependency Report, of the sponsoring employee; and
(3) Officially declared by the sponsoring U.S. Government employee to the COM as part of his or her household.


An MOH may be a parent, unmarried partner, or other relative or adult child who falls outside the Department’s current definition of eligible family member.  An MOH may or may not be a U.S. citizen.

The memo's been filed through security, management, and protocol in Istanbul and Ankara, and the Ambassador signed off on it today.  So there you have it: Eric's officially an acronym! 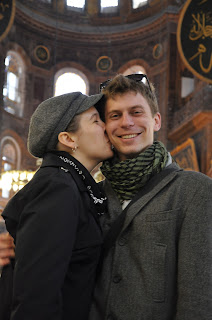